GameStop Is in the NFT Game | Cryptonate

GameStop Is in the NFT Game Pudgy Penguins, an 8,888-piece NFT collection of colorful and cute penguins, is running on empty – at least according to 9x9x9, a well-known NFT collector and core contributor of Open DAO. (9x9x9 is heavily invested in Pudgy Penguins and claims to have spent 600 ETH, now about $2.28 million, in the project.)

The project came under heavy scrutiny yesterday after 9x9x9 posted a tweet thread outlining their experience negotiating with the Pudgy Penguin team for equity in the company. According to 9x9x9, he/she had reached out once before to purchase equity in the Pudgy Penguins company but rejected the deal when the team asked him/her to invest at a 20,000 ETH valuation. Despite not coming to an agreement, 9x9x9 helped support other Pudgy Penguin projects, like Lil Pudgys.

With that background in mind, the founders of Pudgy Penguins reached out to him/her on January 4th to ask if he/she was still interested in buying the company.

Here’s where the story gets interesting… 9x9x9 says that the Pudgy Penguin founders have already split all the ETH from its previous Penguin sales amongst their team of four and are asking him/her to purchase an empty company. Wrote 9x9x9, “Then I learned all ETH has been split, the company they want to sell have 0 ETH/USD in it and even [if] they did 2 fundraising with NFT and promise of games/development, it’s all empty. They might invest some of the royalty back to hire some mods? tbh idk what is their plan?” 9x9x9 went on to post this screenshot: 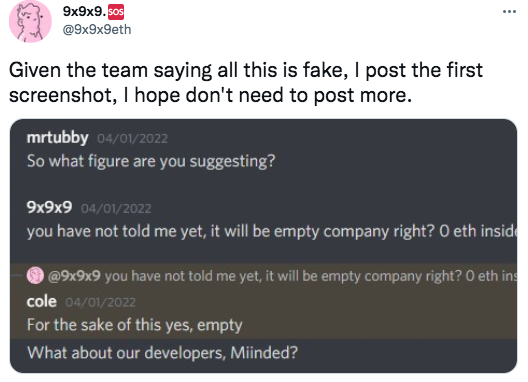 9x9x9 went on to explain that he would not take such a deal. “So this company with 0 ETH inside, carry a debt of two fundraising and boat lots of promise to the community/investors… They want to walk away with ETH they raised and sell the sinking ship for another 888ETH… I will not able to buy some company that raised 2 rounds of funding illegally put in their own pocket and still want to sell an empty shell for millions …”

The fact that the Pudgy Penguins treasury is empty is surprising. Between the original mint, the 3% royalty from secondary NFT sales, and its recently dropped Lil Pudgy collection, the Pudgy Penguins team earned around 2,140 ETH, or $7.29 million in just six months.

For now, Pudgy Penguins appears to be working towards a solution. On Twitter, the team wrote, “We’ve been talking with the team about the best approach to move forward. We are currently in the middle of finalizing important details that we will be announcing. We have a groundbreaking update coming up. Huddle up and stay tuned.” In addition, they opened up a community vote on whether one of its co-founders, who goes by Cole, should remain with the team. (Cole has come under scrutiny in the past.)

As the 22nd-largest NFT project of all time, with $145 million in trading volume according to CryptoSlam, how the Pudgy Penguins team and community deal with this drama could set a precedent.

65% of Active Developers Joined Web3 in 2021(Bonus Content: You can read a summary of my conversation w/ Maria on Medium here.)

Electric Capital’s Maria Shen dives into her company’s recently published research report about Web3 open-source development in 2021 and shares her thoughts and insights on how developers are flocking to Web3 in a manner that goes far beyond just Bitcoin and Ethereum. Show topics:

The post GameStop Is in the NFT Game appeared first on Unchained Podcast.

Read more
Bitcoin Bitcoin bleeding Bitcoin defense legal fund
How To Add Bitcoin To The Balance Sheet For Corporations, With Saylor & Dorsey
Is your company ready to buy the Bitcoin dip? Saylor and Dorsey will give you the 411 for free.99. The MicroStrategy World annual conference goes live on February